In the mid to late 90s and before I permanently switched to Photoshop, I mostly used a program called Corel Photopaint.

In the early 90s and before I switched to Photopaint, I had 24 bit color on an Motorolla O40 accelerated Amiga 3000 via an OpalVision Card and used Opal Paint.

In the mid 80s and long before Opal Paint I was using a far different type of paint program called Deluxe Paint on an Amiga 2000. By today’s standards it was crude but at the time it was state of the art graphics and an epiphany to me.

‘Jack’ is one of my very earliest efforts and was on an interlaced 640x400 screen or even more likely 320x200. So early in fact, I think it was a learning project done on a friend’s Amiga 1000 using Deluxe Paint 1 before I was even using an Amiga 2000. Its as much myth as memory at this point. This B&W image has been processed (de-interlaced & resized?) in the ensuing 35 years but is the only bitmap file that has (almost) made it intact from those early computer graphics day. I suspect 35 computer years roughly translates in human years to the Neolithic Period.

Fast forward ahead to today and I decided to do a modern version of ‘Jack’ in Photoshop. Its as accurate as I can get it. I’m still fascinated by technological progress although realistically, I could have done this update in PS CS around the year 2000.

At any rate, Halloween is right around the corner and I just came across ‘Jack’ (again) and thought someone might get a chuckle out of it, especially compared to the new version. 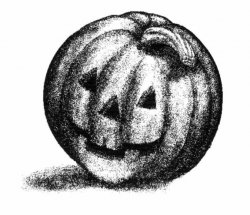 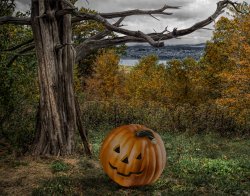 Started out with a hand-me-down Apple IIe, dual 5.25" floppy disc drive, single color amber display, and a daisy wheel printer with perfed sheets of paper to feed.
Was lucky if I could do a daily to-do list...

I am also such an early adopter with dabblings in computer graphics.
I can sympathize exactly and therefore find your new implementation with Photoshop quite exciting.
Beautiful creation.
​

The earliest personal (home) computer I can remember was a second hand Tandy (Radio Shack) TRS-80 that a friend sold me in the mid 70's! Saved data on a cassette tape! There was also a Commodore 64 in there somewhere! But the very first store bought computer I purchased for myself in the mid 80's was a Macintosh...........I liked the new graphic interface. I can remember using MacPaint on that computer and being absolutely amazed!!

In the very early 80’s I bought my first computer, a Texas Instruments TI-994A. It was a great learning tool but not for generating user-generated graphics. I purchased the Enhanced Basic cartridge (a quite nice implementation of the Basic Programming Language BTW) . Exploring it was serious fun but I lost serious sleep and it was obvious that if everyone had to learn a computing language to use one of these computer things, they were doomed to failure. Somebody has to do it, just not the masses. I eventually ordered an expansion box with a 5.25” floppy so I didn’t have to store data on my audio cassette deck and hours later TI announced their home computing business was being terminated. I cancelled my order and never looked back.

I talked the HS principal into putting a Mindset computer (anybody remember them?) in the budget for my art room but when the Amiga came out it was obvious that Mindset allocation should go in a different direction.