How can I improve this picture?

Does anyone have any suggestions on how I could improve this picture? My knowledge of photoshop is limited at best but I am a keen amateur, I would love any tips or tricks anyone has!
(the colour grey is the background of the page it's going on)

Can you please describe what you mean by "improve"? What do you think needs improving?
U

IamSam said:
Can you please describe what you mean by "improve"? What do you think needs improving?
Click to expand...

Perhaps a way to make the marble "carvings" look a bit more 3D and realistic, instead of just brushed on
C

uk186 said:
Perhaps a way to make the marble "carvings" look a bit more 3D and realistic, instead of just brushed on
Click to expand...

Fellow amateur here. I'd say for the pillars, add some faux 3D shading around them, sort of like a cylindrical effect, as shown here: 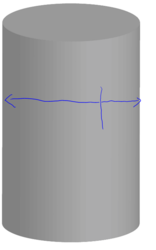 What I personally recommend for effects like this make a new layer on top of both the marble and the pillar carvings, and set it to Multiply. Then, make a selection area around where you want the shade, and mask out everything else (this may require some cleaning). Then, get a standard soft round brush, make sure the Hardness is 0%, and manually paint in the shading with a dark grey-scale color, most likely black.. This should create a basic shading effect with a slight gradient. If you want to add a larger gradient, switch to the eraser, set the Hardness to 0%, and start gently erasing the side you want the gradient to start from (The example picture would start where the vertical line is). As I am still an amateur, I don't know everything, and there may be a more effective way of doing this. From there, you could clone the layer and drag it to the other pillar. As stated before, make sure this effect is on top of both the pillar, as well as the pillar carvings, so it multiplies the luminosity of both. NOTE: You may need to do some more tinkering with this, such as changing the opacity, different blend modes, etc., to get the effect you want.

I can't tell from the image you posted, but it looks like all the details for the marble, such as engravings, are solid. I'd recommend switching those over to a blend mode such as Multiply or Soft Light, and messing with the opacity until you get something you like. If you want added detail, you could also paint in shadows and highlights, but I am not sure how complicated you want this to look.