Need some help with a logo in trying to create. It's probably simple but I'm not a photoshop guru.

Below I have attached the logo I want and also how far I have got. Please help if you can or give me some direction [emoji16] 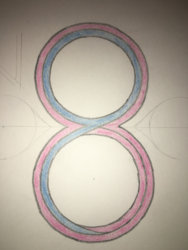 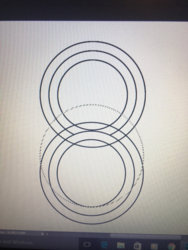 Sent from my iPhone using Tapatalk

Hello and welcome to PSG.

I have moved your thread to the appropriate forum.

Ps is not the best program for this task, Illustrator is much more suited.

Having said that, you can do this in Photoshop as long as your using shape tools.

Have you been using shape tools? You will also need the Pen Tool.

Is your PSD available for upload?
N

I have used shape tools!! I don't know how to erase the parts I don't want then join the 9 together

Set up your center lines.
I first created a Red ellipse that was 400px OD (or whatever size you like....the larger the better!)
I then used the 'subtract front shape' from path operations to remove the center of the Red ellipse set at 300px ID.
When done, duplicate the layer

On a new layer, create a Black ellipse at 350px OD.
Again I used the 'subtract front shape' from path operations to remove the center of the Black ellipse set at 300px ID.
Duplicate this layer.

Now you have to position everything.
Use the Move Tool to do this. I just use the directional arrows.

Repeat the same process for the Black ellipse layers.

Lower the opacity of the Black ellipse layer.
Create a new layer.
Select your Pen Tool. Set it to shape. Set your color to black.
Create a path/shape to join/link the two black ellipses.

IamSam that incredible thank you. Once this process is complete, how would I change the colour of the '8' and '9' for a colour of my choice with a black outline? Similar to my drawing. I honestly appreciate the time and effort that's gone into your reply. Thank you

All the components are shape layers so their colors can easily be changed at any time. The outline can be added with a stroke on the shape layer as well.
This color change literally took me about 15 seconds.