Hello all:
I've downloaded and attempted to use this Pattern Suppression tool - I'm running PS 2022:


When you run the tool, you're supposed to get a star pattern looking something like this: 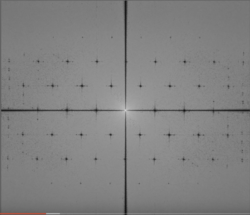 Instead, I'm getting a pattern that looks like this: 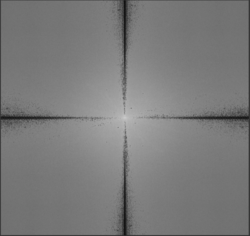 No "star" patterns appear - just a grainy representation. I've tried painting out the center star as instructed and the vertical and horizontal lines. I've also tried both normal and aggressive actions, as both b/w and color. But I still get a repeating pattern in my image.

Here's a portion of the image I'm working on:

Here's what it looks like when I use the tool:

The color informaton has been removed - which is ok - but the pattern is still there.

*Note -the last time the tool was updated was back in 2018. So I'm wondering if it's just no effective on the newer versions of PS.

I anyone can offer any insight or thoughts, it would be greatly appreciated.

Hi @JeffK
Can you post the original image with the pattern? Or is the colored pattern fully representative of the whole image?
John Wheeler

Hi John -
From what I understand, it's a scan from a Google book and that's how it was presented. Admittedly it's from another forum so don't know if I can break confidence. But yes, that's an overall pattern on the entire image.
This morning, I tried it on another image and did get the star pattern as shown in the video. So I'm thinking that it's a problematic image that might not work with this action.

Here's another image I tried it with: 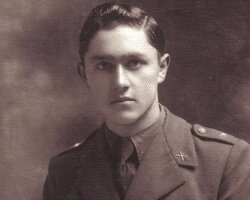 When I run the action, here's the star pattern: 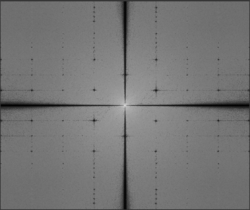 Here's the finished image as a b/w: 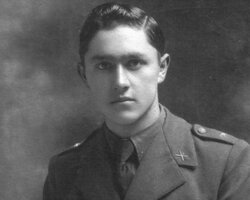 I think it just may be that "one size does not fit all" - the action just doesn't work with the first image I presented.

But if you want to tinker, there's no one I would trust more to provide some insight!

Hi @JeffK
Turns out that these types of pattern suppressors use a digital algorithm named FFT for Fast Fourier Transform. Exactly repeating patterns can be broken down into a summation of single frequency signals and one can then selectively remove those signals as desired. In a one dimensional space this is used for analyzing/correcting e.g audio signals to remove specific sounds from the audio. This can also be done for a two dimensional space such as images. The areas on the 2D map represent the frequency components (distance from origin) and direction of pattern (how the mirrored pattern lines up).

It only works when the pattern is exactly the same across the entire image which is not the case for the colored pattern image.
So you are correct, it does not work for all patterns.

Agreed. We tend to fall into the trap of thinking that one action will work on all images. I've found that not to be true even with Topaz AI.
Thanks for giving it a look, John!
T

can someone please help...Ive installed the Pattern suppresser but it gets to where you wipe the star etc but it won't do anything?...my curser works but nothing happens..I using Windows 11

Thanks for the reply Jeff...no I run the 1st part and then try to uncover the stars, the cursor moves but it uncovers nothing? before apply suppression..

Trevor dare said:
Thanks for the reply Jeff...no I run the 1st part and then try to uncover the stars, the cursor moves but it uncovers nothing? before apply suppression..
Click to expand...

OK - just to clarify in my own head the steps you're taking, you run the first part of the action - ie NORMAL SUPPRESSION - on the image.
You then get a window that looks like this: 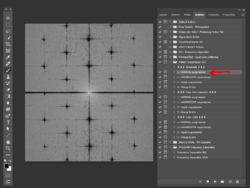 Now using your black brush, you paint out the lines and the center intersection of the lines: 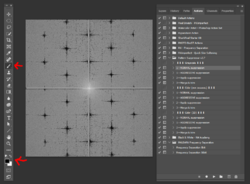 Next, you switch to your white brush and paint back in the stars that are on the lines: 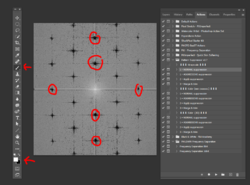 It's at thsi point you then run the 2nd part of the action - Apply suppression. 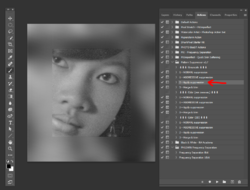 What I think you're saying is that you're having trouble bringing back the "black" stars after you've covered them? Are you switching to the white brush?

The only other caveat - according to the PDF of the latest Pattern Suppressor, this has been tested up to Windows 10. So not sure then if Windows 11 might be an issue...

BTW - here's the initial image above compared to the final image: 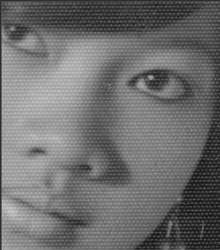 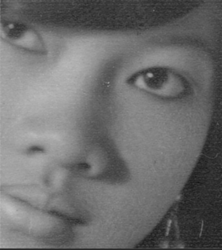 I get to the first photo and nothing..cant paint out the lines..I've tried it on my other computer with Win 10 works fine..so must be windows 11..anyone with a fix would be great thanks

Trevor dare said:
I get to the first photo and nothing..cant paint out the lines..I've tried it on my other computer with Win 10 works fine..so must be windows 11..anyone with a fix would be great thanks
Click to expand...

Looks like there's no further info regarding Windows 11. I left a note for the developer on the tutorial.
T

Pattern Suppressor 2 has been the best FFT software in a Photoshop plugin that I have seen to date
I recently discovered it does not work on my new Mac with Apple Silicon either
I did get a response when I sent in a request to understand if and when there would be an update for Apple Silicon and it was not too hopeful.
The good news, it is open source software for those that have the skills and time to rebuild the software on a new platform.
The code is available on GitHub under https://github.com/rechmbrs/FtPattern
It should be noted that is also relies on a package named FFTW which is a C language subroutine library for FFT computations. That may have to be rebuilt as well. It's source code is available at
https://www.fftw.org/

I am tempted to give that a go myself yet probably know just enough to get me in trouble and frustrated i.e. a fools errand with me being the fool
However, my son is a Software Developer and there is a remote chance I could get some help from him in the attempt at least on a Mac.
I will ask him to see how feasible it is for this to be done (by him ). He works full time so its a long shot yet will at least ask him. I will ask him about Windows as well though he too primarily uses Mac computers.

I will post when I have any update on this topic

If any other forum members have the skills to take this on, it would be great for any support on this project.
John Wheeler

ADDED COMMENT : There is a chance that if I run Photoshop under Rosetta that the plugins could work. I will give that a try too. R orosetta is a piece of software that will allow Intel code to run on Apple Silicon similar to a virtual machine or emulator. That's at the cost of some performance speed so not a perfect solution for the long term.
Last edited: Jul 2, 2022

Thanks John for the additional backup info. Yes, i did also see that on the Mack, Rosetta might be a solution to a similar problem.

I did get a response from the developer - Jonas Madsen Rogne - and he just recently tested the software on Windows 11 and had no problems:

"It should work on Windows 11. I tried running one of the plugins just two days ago."

For Windows 11 then, rather than digging into the software to change it, I would go for the obvious choice of reinstalling all plugins and actions.

Technology does bring an assortment of baggage...
T

Hi @JeffK Well good news for the FFT on my Mac. I forced Photoshop 2022 to use Rosetta and after given permissions for the Plugins to be accepted as OK for the Mac OS and it ran just fine.

Also, for @Trevor dare , I may have stumbled on a solution for you issue (maybe). Right after running the "Suppresion Action" it gives you a message on the screen as it shows below.
At this point, your cursor will be able to move yet even thought it is set to Brush already, the brush circle is not showing.
The issue is that all action in Photoshop has been frozen until you close this dialog box. It turns out that for this particular message, you can click either "Stop" (preferred) or the Continue button and since it is the last command in the Action, all it does is stop.
After you close the dialog, the brush cursor should be active and ready to go.
With all the good instructions for this ACTION, it did not include that you have to close this dialog to continue.

I don't know for sure that this is your issue yet it has all the characteristics for what you describe. I just stumbled on it because I did not close the dialog and was moving my cursor and was also shocked that it would take not brush anything and then realized that it was just a cursor and not a brush and soon as I close the dialog, the brush worked fine

Hope this is the problem for you so fingers crossed.
John Wheeler

PS - Even though I have a solution on my Mac using Rosetta, my son has already walked me through compiling FFTW from scratch on my Apple Silicon MacBook Pro and it compiled successfully. Now I need to see if I can recompile all of the 6 plugins executables. That may be more pushups as I need to find the Photoshop SDK for Apple Silicon so will post more if I can make progress. 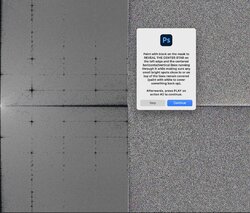