strange behaviour 2 of Photoshop 2022... when I open an image as in no 1 below, and press Command Zero (I'm on a Mac) it does not make th image fit to screen. it leaves it the same size as it opens as, but if I zoom in slightly or zoom out THEN hit command Zero, it will fit to screen... using the pulldown menu has the same results...

this never happened in Photoshop CS6.. as in that Command zero would ALLWAYS fit tp screen.

not a great problem.. but again puzzled why thing that worked in CS6 don't under 2022.

easy to work around. but breaks my natural method that I am used to working to. 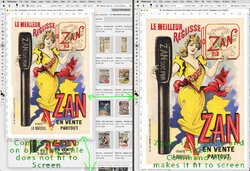 Also, do you still have the ability to go back to CS6? You seem to be much happier with that version. You may enjoy a few more features with the latest version, but CS6 will get the job done without question. It appears that you would be much more content working with less features than having to cope with annoying changes to your normal routine. As a person with moderate OCD, I can relate to that!

I personally find some upgrade changes to be irrational, often quirky, and problematic, but I work through them. I don't always understand why the changes were made and as in your problem here, many times it's not a reproducible issue that happens to everyone else. It's inherent to my personal machine and how it's reacting to the software. I'm running the exact same Ps version on two different computers, both Macs, and neither act the same for certain processes. It's irritating to say the least, but I move on.
N

Hi, thanks for the info. but the way I work, dragging layers, sometimes from 20 or more images, from one document to the main one makes tabbed windows rather hard for me, that I have tried (I have only been on this for a month).. as I have little experience with them. and many decades with normal windows.. sadly my old 2012 iMac 27" "blew up" when I plugged it back in after the disastrous floods in my city (that destroyed almost all I had)... the cabled got wet and other electrical faults etc... so I cat return to my beloved old Photoshop CS6... (on the other side of the coin, I am finding the "blinding" speed of the M1 iMac everything I ever wanted... some Topaz filters used to take up to a half hour on the 27" now take under the minute..)

I totally agree with you about the often query way some upgrades work, and features change.. hence my original post. as I am a creature of habit, and getting into new routines will take me some time... I almost and point of being obsessive compulsive... (but there is an old saying "when your on a good thing, stuff it up" as adobe often do... they can't leave well enough alone in some areas...

already making discoveries all the time..

one also develops muscle memory, the necessary keystrokes, finger movements, become rote, natural, and any change can cause untold stress - after years working in one nle, i moved to another with a completely different methodology. it's took me about a year to adapt to a point where i didn't have to keep checking myself ;-)
N

yep.. but I have a different problem. I had my right hand re-assembled in 2007 after a power saw accident, 6 hours of surgery and they lost count at 600 stitches, so my fingers often touch the wrong keys when in don't want them to, and my new Mi keyboard IS DEFIANTLY smaller key sizes than my old 27".. (an Alsatian dog tore out my left hand wrist when I was 6, so no strength there). often makes my typing look as if I am drunk, because autocorrect them mucks it up... ahahah and with Dyslexia and Aspergers thrown in I am a hopeless mess... hahahah

well, not trying to outdo you (not sure anyone could ;-)), i have dupuytrens contraction quite severely in my right hand, less so in my left - i find the only way to work commercially is with a wacom pen and tablet - a mouse gets to be very painful very quickly. so having fingers that are bent at awkward angles also makes learning any new keystroke combinations a challenge - but hey, isn't life? ;-)
N

I watched a college expert using a Wacom tablet and was so fascinated that I bought one. could never used it right. all my retouching is don with a Logitech wired usb mouse. regards, Sandy

yeah, old age is a real PITA, and many more places besides, but it's way too late to die young and have a good-looking corpse.
took me a while to come to terms with using a wacom, but now i have, there's no way back. that said, i've been toying with the idea of a logitech style roller ball mouse, as an alternative to the times i actually do use a mouse. i used to use one way back in the very early days of nle - terrific for speeding through footage, and the like...
N

I found the apple Magic Mouse, with its surface "tablet:" are good on the old slow 2012 iMa, but the M1 is so blinding fast the slightest mist ought or gesture, even slight pressure on the right click area, etc makes great jumps too much for me, so I went back to using a usb cables mouse, and it is perfect... mind you I bought the second Fat Mac to come to Brisbane in 1985, so hav been using hand cursor coordination since... in fact I have to look and spell s I type on my keyboard, but no trouble moving around all day... sometimes old technology I sth best. regards, Sandy

nurgle said:
so I cat return to my beloved old Photoshop CS6
Click to expand...

CS6 was the last of the boxed Ps programs before Adobe went to a subscription base. Most people who used CS6 had a copy and I was hoping that you could still load it on your new iMac. It's a shame as I believe this would solve your current problems.

Hang in there and keep working with the changes...............you will either learn and adapt or accept the only other option which would be to throw in the towel and take up another hobby!
N

Cs6 I believe won't Ron on anything above High Sierra, or the next one up...

I had wil till the flood, all the boxes and disk back to Photoshop 3, even though I have been on it before it even had the photoshop name... can't remember but it only did B&W then..

starting to get very rusty in my old age.

Looked into it out of curiosity - via Wikipedia - when first developed, it was named "Display" and worked only in grayscale. The official version of Photoshop 1.0 was released for Mac in 1990 at a cost of $895.00.
Back in the day when digital color correction came into play in the print industry, long before desktop became widespread, you would pay up to $2,500.00/hour to have image correction done on specialized equipment like Scitex. I remember when there were only 2 companies in NYC that had the equipment and the art directors were really running up the budgets to get access.