I'm not sure if I should continue to share my images through the mists of avalon thread or create a new one. Anyway I thought I'd post this image. I sold it in an exhibition I had. In the exhibition it was it was much much larger and on canvas, but you get the idea. I'm sure you could easily print it off on a 8x12 printer. I took 3 images. I used "bulb" because after some minutes the camera won't shoot longer without. I then combined the images into an HDR and tone mapped it. Since I used 3 images I brought back the stars using a layer mask, and the reason why is the stars move, or the earth moves and the stars move in the frame, so only one image could use the stars without the stars turning into lines i.e when combined. It was cold when I shot. Right now it is -32'Celsius. But when I took the picture it was -46'C and 2 am. I remember the battery died on me after 20 minutes, which is very fast a DSLR camera battery (Nikon d80). I don't just do winter stuff. In the spring I went up north on a bicycle in May. In Canada and up north they have these large antena's for radio stations, mobile and stuff, in the forest regions. They're like 80 meters tall and 15 meters from the highway. I biked up there and the lightening would hit the towers and go straight down into the ground. Firework shows do not prepare you for this. The light and the sound just isn't comparable to anything. And on a bicycle it's very scary. I regret I didn't take photographs of this. Lightening hitting the ground 15 meters away is a terrifying and awfully exciting act of mother nature to witness. 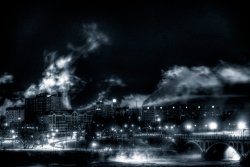