Unsuccessful in setting up a two-monitor system

I wish to run Photoshop with two monitors – a main larger screen monitor and a display tablet. Let me explain the setup and installation results:

I am running a Dell Precision 7530 laptop with Windows 10. I have a Benq 26” monitor connected to the computer with a DP cable and a 16” Huion display tablet connected to the computer with a HDMI cable. My objective is to have my full Photoshop workspace shown on the larger monitor and the ability to work only on magnified portions of the image with the pen on the display tablet.

After I connected the system, I found that in the Windows Display settings menu both monitors were correctly identified. In further setting up the system under Multiple Displays there are four options, as follows:

‘Extend these displays’ – in this mode I am able to select a main display and when doing so I find the main monitor is shown correctly and all Photoshop actions function as they should; but while the secondary display retains some controls, it lacks an image. On the secondary display the Desktop background picture is shown and also the pen cursor and the program tab bar at the bottom of the screen, but nothing else; and the pen cursor, when used on the display tablet is misaligned with its position on the main monitor (note that this is not the case with the previous mode). These characteristics are the same when I identify the other monitor as ‘main’, with the monitor characteristics just vis-a-versa.

The other two options are ‘Show only on 1’ and ‘Show only on 2’ and with them the system properly works independently on the designated monitors as it should.

It seems that the problem is in the ‘Extend these displays’ option. I don’t really know what this means, and would appreciate any aid and assistance in solving this problem.

Note that I have already updated the Windows 10 system, as well as my display adapters – an Intel UHD Graphics 630 and a NVIDA Quadro P1000.
M

Hi
If this helps these are the display settings I have set for 2 monitors windows 10, Hope this helps 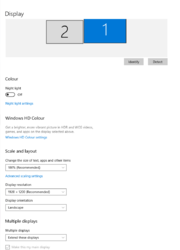 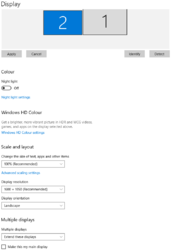 Hi Again
You might also want to look at any specific settings on your graphic card software plus possibly check drivers.. My graphic card options 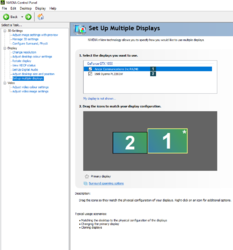