Layer mask shows but not masking

Hi all:
Sudden problem with PS 2019.
I do a quick partial selection, then choose Select Subject. Then choose Select and Mask.
That brings me to the options dialog box.
If I don't make changes - or do - I then select Output to: New Layer with Layer Mask.
The mask shows up on the layer, but no masking occurs. If I try to paint on the mask, nothing happens.
Here's where the dialog box looks like:

But the image isn't masked. I've check all my settings, I made no changes since yesterday when the mask was working, and now I can't get the mask to work.
Even if I choose Output to: Selection, the entire image shows up in the new layer with no masking.
If anyone has had the problem or can provide insight, please let me know. Highly frustrate and want to avoid download a fresh copy of PS.
If you need any other screenshots, let me know.
Thanks as always for your guidance and support!
- Jeff

JeffK said:
But the image isn't masked.
Click to expand...

Your canvas image should look like this. Which means the layer mask is working.
I'm not sure what your mode and opacity settings are on the "High Pass" layer. 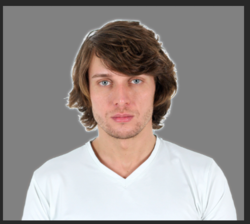 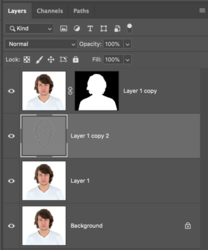 Try turning off all layers beneath the masked layer to see what's left over.
Should look like this.... 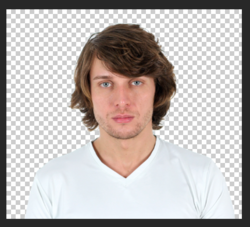 If I turn off all the layers underneath, the mask works.
But never had this problem before.
If I take a fresh image, go thru select and mask. choose Output to New Layer with Layer mask, same issue. The layer mask is there but it doesn't mask. So now I have only two layers - the original layer and the masked layer.
But if I turn off that first layer, the mask works. It's almost as if the mask is "blinded" - that it's physically there in the layers panel but doesn't work.
Now if I try to alter the mask by painting on it in either black or white, there's no effect. For instance, if I paint white on the black portion of the mask, nothing is revealed.
But here's another oddity - the layer directly below the masked layer is automatically turned off.
So here's the select and mask dialog box: 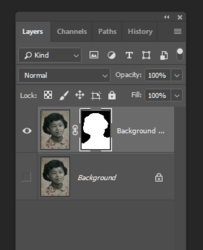 The image is masked, but I didn't turn off that bottom layer.

Even if I rename the background layer, the same thing happens: 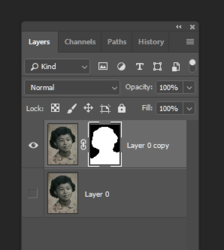 Somewhere, somehow, a setting has changed where the mask is somehow transparent if the layer below is turned on. I checked the transparency of the mask and it seems to be set at 100%:

Just can't figure this one out - as much as I want to avoid it, might have to download a new copy. Maybe reset all tools preferences?
- Jeff
J

These are the mask properties:

From my understanding the results you are seeing is exactly what I would expect with the "New Layer with New Mask" option. If you have two identical pixel images on top of each with the top Layer with a Mask, any less than white part of the image mask just sees through to the same image below.

What am I missing?

In the past, maybe you were using the option to output just the "Layer Mask" (which is what I most often use.


JeffK said:
Somewhere, somehow, a setting has changed where the mask is somehow transparent if the layer below is turned on. I checked the transparency of the mask and it seems to be set at 100%:
Click to expand...

No..........nothing has changed! This is absolutely normal and how Ps has always worked!


JeffK said:
Now if I try to alter the mask by painting on it in either black or white, there's no effect. For instance, if I paint white on the black portion of the mask, nothing is revealed.
Click to expand...

The only time this would happen is if you have two identical images (one masked) on two layers that are active.

Here I have made a brush stroke across the face. Both layers are active.
The layer mask appears to not be working (but it really is).... 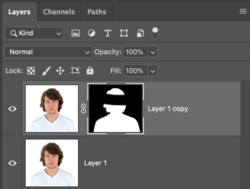 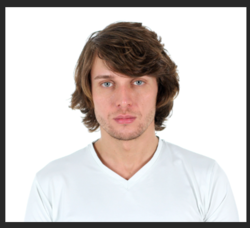 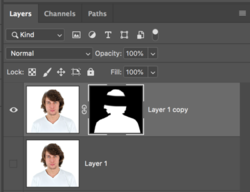 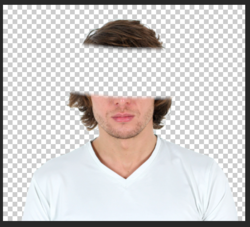 @IamSam and @thebestcpu - either it was late, I did things out of my usual sequence, or the Logic Gods got hold of me. But I had it in my head that ir I applied a layer mask to a top layer in a palett , then all the layers below would be masked. For some reason it was not in my head that the layer mask is applied only to the selected layer

Puttering around, I realized that if I wanted to mask a number of layers, I could just group them and mask the group. Not sure why I would want to do that but I had to proof out the reasoning.

Thank you both. It's Monday - time for a fresh start.