IamSam said:
Are you guys just trying to remove the transparency grid from a screen shot?
Click to expand...

I was, yes. But turns out the limitations of what I was trying to do was losing the solid finer lines in the image.
I would guess the eps in Illustrator would be the best option as [ iLLuSioN ] suggested.
My fault for turning this into a bit of a mashup - curiosity got the best of me...
- Jeff
T

Hi @IamSam
I believe the discussion went off topic and can be taken offline with DMs
Before you posted the original PNG, I had already taken the screen shot and removed the checkerboard representing the transparency. @Jeff was just asking me how I did that so started the off-topic back and forth. We can take it offline and if you desire the thread to be a bit cleaner you could remove the off-topic posts.
Just my thoughts
John Wheeler

NO....No it's fine. It's all relevant. I was just not sure if we were still working on the OP's problem.

In that case, both I and @JeffK were playing around with how to take the checkerboard pattern in the screenshot and eliminate it and preserve the line drawing with actual transparency between the lines (Of course having the original PNG posted by @IamSam after my extraction is the easiest ).
Both I and @JeffK tried different approaches with varying levels of difficulty and success. @[ iLLuSioN ] suggested that using a vector program with the vector original would be a lot easier (I agree). That spurred both @JeffK and I to try it out in Illustrator (we are both newbies in Illustrator) to try and remove the checkerboard in the image.

So here is my attempt at using the Trace facility in Illustrator with the settings that did a pretty decent job of creating a vector file without the checkerboard.

I set the trace mode to Black and White. Setting the Threshold level was pretty crictical to ignore the gray level of the checkerboard. I also set the checkbox for Fills (and Strokes yet that is optional in this case). I also set it to ignore whites so the vectors would just be created for the black areas.
Then I exported out of Illustrator in PNG.
It came out pretty good yet there were some remnant bounding box black lines to deal with which I subsequently erased in Photoshop, Illustrator. Did a pretty good job and could have been easily scaled to any size being in vector format in Illustrator.
I have included the Illustrator screenshot, screenshot of the PNG that was exported from Illustrator, and attached is the vector PDF file
Just an exercise in learning for me
John Wheeler 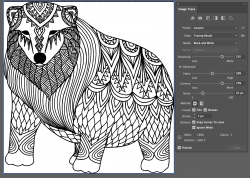 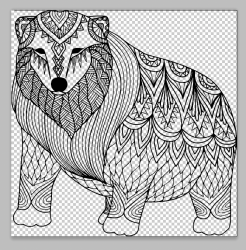