On a post in another forum, there was a request on how to repeat a stone pattern. Getting a tile pattern to look a bit less repetitive has never been very easy for me in PS so came up with this approach on the fly (not well baked yet if helps some).

The key method I was using was to strategically incorporate Content Aware Fill to help obscure some of the problem repetitive area to make it a bit more semi-random.
The human eye is pretty good at catching edges and repetitive patterns yet can also be fooled by a bit of camouflage.
I will use the stone pattern for the other forum as an example of the approach I took (note it can be done a number of ways).

The stone image is below and is 451 pixels on an edge. This was converted to a pattern via Edit > Define Pattern: 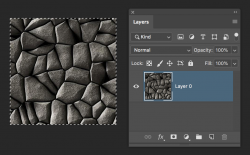 I also created a Pattern of the same size yet just a black border with the black border edge size being about 1/2 the size of the largest stone in the stone pattern (75 pixels because the largest stone was about 150 pixels). This was simply done with an empty Layer, selecting the entire image, modifying the selection to be 75 pixels smaller and then inverting the selection and filling with black. Used Edit > Define Pattern to create this second Pattern: 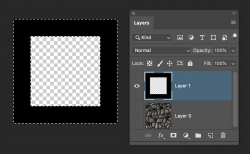 1) Created a new document that was 5000px x 5000px. I used the large size both to make sure it would work and at larger sizes tile patterns show their edges pretty well
2) Did an Edit > Fill using the stone pattern yielding this screen shot (you can see the pattern edges pretty well): 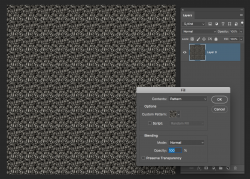 3) I created a new empty Layer. I used Edit > Fill and selected the black boundary Pattern that was previously created. With the Cmd key depressed (Cntl key on PC) click on the Layer thumbnail to select the black Pattern. Delete this top Layer. You will be left with a selection that surrounds the tile edges. 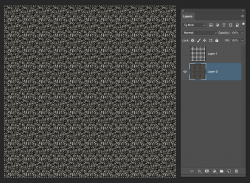 Now use the command Edit > Content Aware Fill. Select the dropdown option for Rotation Adaptation and set it to Full. Depending on the speed of your machine and graphics processor this could take a bit to process. On my 2015 MacBook Pro it took a couple minutes finish.

Some of the repetitive pattern has been camouflaged yet there is still some Pattern edges to be seen: 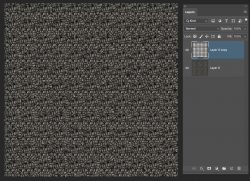 To reduce the repetitive pattern further, some randomness needs to be introduced to break up what the eye/brain catches. To do this, I first created a new blank Layer. I used the rectangle brush that we created. I set the Brush Settings so the the brush has larger spacing, that there is some size jitter, angular jitter and some scattering jitter. I brushed over the entire area of the image added a bunch of random squares of various sizes, angles, and position.

Hold Cmd key (Cntl Key on PCs) and click on this Layer Thumbnail to select the rectangle boundaries. Delete this Layer. You now have random selections across the tile pattern again. 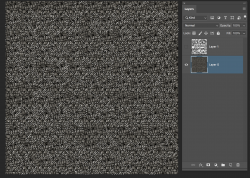 Again use the Edit > Content Aware Fill with the same drop down settings.

When this completes, less of the repetitive Pattern can be scene and the Content Aware Fill often does a decent job on the Fill (Yet not always)
You can still see some of the repetitive Tile Pattern yet its a lot less than the original image Tiled above: 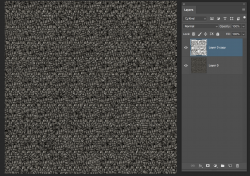 There are a variety of ways of creating some randomness in the Tile Pattern and this is just one.