How to create similar picture

As the title states, I wonder if it's possible to create a similar picture in photoshop or it's made up of different layers of photographs. (Picture attached)

It is probably a succession of applied filters in different blend modes...
One filter is for sure 'filter/artistic/plastic wrap'

I have seen this photo before. I believe I was told (or read) that it was commercial printing dye in a can in which the surface had dried and hardened. The dried shell was broken up with a screwdriver revealing the liquid dye between the cracks.

This is a photo from a book. 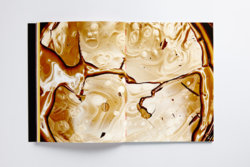 In order to reproduce a similar effect in Photoshop, you will need to look at some Ps liquid metal effects that would need to be applied to the liquid portion flowing in the cracks of the composite (using a layers style). The broken shell would be another layer with it's own effects. This would be somewhat of a challenge.
You must log in or register to reply here.
Share:
Facebook Twitter Reddit Pinterest Tumblr WhatsApp Email Link