And the word is "Loki" - oh, that German fonts...
Everything will go bad anyway - why to be pesimist, then?
R

Interesting... I had never heard of these before. And they are called foo fighters, which is also the name of a US rock music group.

Well, I don't understand, what 'foo fighters' does mean, but it sounds cool as a name of rock band.
Everything will go bad anyway - why to be pesimist, then? 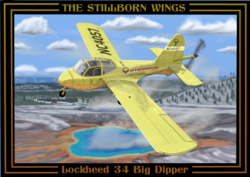 In 1944, Lockheed company decided to begin production of small and cheap civil airplanes. The first one was one-seated Model 33 Little Dipper (see another picture). Together with it one more machine was planned - two seated tourist airplane with similar design. The bigger bro' has also one engine (Continental C-100-12), but with wooden propeller placed at the back of fuselage. Both Dippers were planned as a big surprise for public and their tests were provided in secrecy. Model 34 took off first time 10.12.1945 in Burbank. The first takeoff was sucess, but during one of the next takeoffs the airplane crashed due to unkempt runway, the pilots were injured and the machine hardly damaged. As the Little Dipper was also destroyed in crash, the Lockheed company given up production of airplanes like the two.
Everything will go bad anyway - why to be pesimist, then? 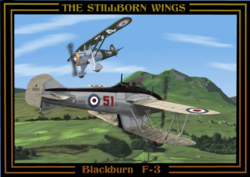 Following the release of Air Ministry Specification for a single-seat day and night fighter, eight different companies proposed 12 different designs and three, including Blackburn Aircraft, received contracts to produce a prototype. Blackburn's design, the F.3, was a single-bay biplane of unequal wingspan and with an unusual configuration, the upper wing being mounted approximately halfway up the stressed-skin fuselage and the lower wing about two feet below it, the gap being occupied by an enclosure for the condenser of the evaporatively-cooled Goshawk III engine. The undercarriage was attached to the lower wing's front spar, with diagonal struts transmitting the landing loads to the fuselage longerons. Initially the wheels were fitted with spats, but these were later removed. The four Vickers machine guns were fuselage mounted, two in mid-position on the fuselage and the other two on either side of the top of the condenser housing. Taxying trials of the F.3 began on 20 July 1934, but the aircraft was difficult to taxi safely, due to the combination of a short fuselage and a high centre of gravity. Additionally, the engine suffered from cooling problems. Further development was stopped when, after an inspection revealed damage to the rear fuselage resulting from the taxying trials, the Air Ministry withdrew support for the project since the aircraft would have been too delayed to take part in the evaluation trials.
Everything will go bad anyway - why to be pesimist, then? 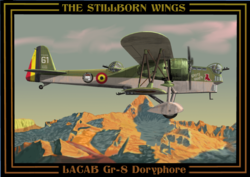 In 30s, many smaller and weaker states, feeling an incoming danger, made an effort to make their own war aircrafts. Because of their limited resources, the countries tried to construct as universal machines as possible. One of such a planes were designed in Belgian 'Les Ateliers de Constructions Aéronautiques Belges' company. The biplane for 3 - 5 member crew and with two Gnome-Rhone 14Kdrs engines was mentioned to serve as long range bomber, scouting plane, heavy fighter and even torpedo bomber. The first takeoff was made 14.5.1936, two months later the plane started to by tested by Belgian air force. The tests were not satisfactory enough and in the spring of 1938 the prototype crashed. It was repaired during next two years, but in May of 1940 damaged in hangar by German attack and then shut down after occupation of Belgium.
Everything will go bad anyway - why to be pesimist, then? 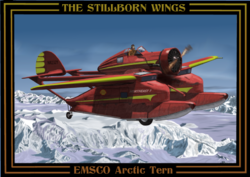 In the decades before WW2 Arctic exploration took a new impulse thanks to aviation. This aircraft was one of the rarest airplanes designed specially for that purpose, by Charles Rocheville in answer to a Shell Oil Co. request for their Alaskan survey explorations. Built in 1932, this three-seat mid-wing monoplane amphibian had a certain Lockheed’s touch; it was created using a Sirius’ wing and a Vega’s tail. The pilot enjoyed the pleasure of a open cockpit atop the small nacelle while the crew was cosily placed in the cabins above each float/pontoon. It was powered either by a 300 hp Wasp Junior or a 450hp Wasp. During tests the Arctic Tern displayed wholly satisfactory performances, but, sadly, the aircraft was lost in 1933 in an accident caused by fuel starvation and Rocheville suffered serious injuries.
Everything will go bad anyway - why to be pesimist, then?
R

Jergon said:
The pilot enjoyed the pleasure of a open cockpit atop the small nacelle while the crew was cosily placed in the cabins above each float/pontoon.
Click to expand...

If this airplane was specifically designed for the Arctic, wouldn't the pilot freeze to death in 5 minutes with an open cockpit? How could that have been a good idea?

Rich54 said:
If this airplane was specifically designed for the Arctic, wouldn't the pilot freeze to death in 5 minutes with an open cockpit? How could that have been a good idea?
Click to expand...

Yes, I also think the open cockpit is a big atrocity and don't understand the designer of it...:-o I have stolen this time the under-pic words from another website and guess they have been meant as ironic...
Everything will go bad anyway - why to be pesimist, then? 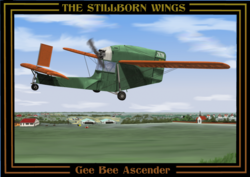 The Gee Bee Aircraft Company was found in 1925 by five brothers Granvilles in Boston (later moved to Springfield) and during the 30s designed many succesful racing aircrafts. In the 1932 a speed record was made by the Gee Bee R-1 and American pilot James Doolittle (yes, it was THE Doolittle who later organized the attack to Tokio with B-25 Mitchell bombers taking off from naval aircraft carriers). Much less succesful was a small experimental machine designed in 1931 with an wings and engine from an airplane Aeronca C-2 crashed before. On the Christmas of 1931 the machine started first time controlled by Mark Granville. It flew good enough in straight flight but in turning aside it became uncontrollable and crashed. The pilot was seriously wounded. After this failure Gee Bee Company left the experiment and returned back to its famous racers.
Everything will go bad anyway - why to be pesimist, then? 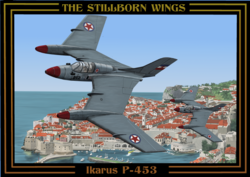 In the early 50's the Yugoslavian government ordered tu build an small experimental jet aircraft. Designed by the General Directorate of Aviation Industry (Generalne Direkcije Vazduhoplovne Industrije) in 1952. The aircraft was an attempt to find the optimal shape to accommodate two jet engines, the Turbomeca Marbord II . The aircraft was built as a glider, to which engines would be fitted. The project was cancelled after a crash during the first flight in, in which the unit was completely destroyed.
Everything will go bad anyway - why to be pesimist, then? 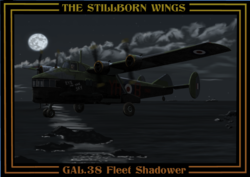 In 30's British Royal Navy came with specification for a special airplane shadowing enemy fleets and spy their movements during night. As the Navy didn't want more then about 30 machines, the bigger companies didn't insterested in it, so two companies only were contracted: General Aircraft and Airspeed. Two similar prototypes were built - GAL.38 and AS.39. Third company, Pobjoy, was ordered to construct extra-silent Niagara V engines for both of them. Due to development problems at Pobjoy with them, it was decided to use the lower-powered Niagara III civil version. The first prototype flew on 13 May 1940 with the Niagara III engines. The aircraft had major modification before flying again in June 1941 with the Niagara V engines. With the incomplete second G.A.L.38 being used as a spares source, test flying continued until September 1941. In October 1941 the company was instructed to scrap the second aircraft, and in March 1942 instructions were issued to scrap the prototype as well.
Everything will go bad anyway - why to be pesimist, then?

are you draw all of this ? i cant believe it. its to realistic

Background is painted on Gimp, the plane is drawn first on paper and then colored in Gimp, too. Like all the others in this thread...
Everything will go bad anyway - why to be pesimist, then? 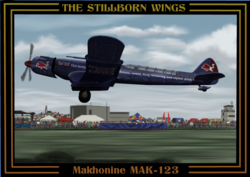 Before the WW2 there were many aircraft designers trying to construct airplane with variable-area wings, mostly in Soviet Union and France. In France, Ivan Makhonine, designer with Russian origin, developed the concept of hollow wings with a next, telescopic parts hidden inside. His first machine, Type 10 (later 101, after reconstruction) was tested until the WW2, with many complications, then Nazi took it, later it was damaged by guerillas and destroyed by American bomber attack. After WW2, Makhonine designed the Type 123, flying first time at Toussus-le-Noble in 1947. The machine was good enough first, but then its engine failed and the airplane was forced to emergency landing in potato field. Makhonine then didn't continue with his experiments anymore.
Everything will go bad anyway - why to be pesimist, then?

Hahaha. Love the RedBull decals on this one.

Well, what to do with such a long long long airplane?

Everything will go bad anyway - why to be pesimist, then? 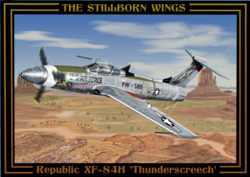 In the 1951, US Navy and Air Force together started a project of new long range fighter. The Republic company designed an airplane developed on F-84F Thunderstreak (it has the same wings, part of fuselage and canopy), powered by a ram extended turbine and supersonic propeller. Its unofficial nickname was based on the extremely loud noise of its engine - the plane was probably the loudest aircraft ever built. Its propeller was rotating in supersonic speed and produced continuous visible sonic boom. When taking off, the noise was heard in more than 30km of distance and people standing too close could be knocked down by the sound... There were four prototypes ordered (three for AF and one for N), but two were built only. Both of them flew in 1955, but many problems with the engine occured (11 of 12 flights ended by emergency landing), so Navy first and then Air Force too stopped to accept it and all the project was canceled in 1956. One of the prototypes is still placed as statue on the Bakersfield airport.
Everything will go bad anyway - why to be pesimist, then? 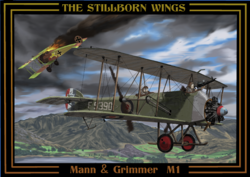 In the year 1914, the synchronization between gun and propeller hasn't been developed yet, so the two young British modellers, R.F.Mann and R.P.Grimmer found a bit strange solution of this problem. Their two-seat fighter prototype had a radial engine placed in the nose, but with two propellers driving behind the wings, in a pusher configuration in order to give the gunner a good field of view.
The prototype was completed at Hendon Aerodrome in February 1915 and made its maiden flight on 19th February but its complicated chain drives created some problems and underpowered the engine. When it was expected the prototype to be tested by the Royal Flying Corps, it crashed when landing after trying to beat the British altitude record on 16th November 1915.
Mann had designed an improved version, the M.2, but the lack of funds made it impossible its creation.
Everything will go bad anyway - why to be pesimist, then?